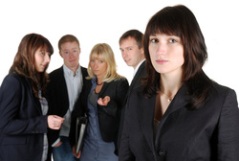 The brain is a problem solving device. It is in a constant pattern search, even when there are no patterns to be found. This reality has a heritage in survival anthropology: the fight or flee decision had to be computed even with incomplete information. Waiting for all information to be available could be fatal (by the time one of our ancestors would pause to carefully analyze whether a moving bush meant there was a tiger behind it would have been too late). And so the brain, if it has to, will make up fictitious information to fit a pattern.

But this ability presents an inherent risk: we all have the potential to reach incorrect conclusions by forcing the wrong pattern to a situation we don’t understand. The leap from conclusion to strong opinion is effortless, as is attaching emotional value to a certain opinion. And with strong opinions comes the potential for questioning authority. Want proof? Consider how often you hear the conspiracy theory. What is the conspiracy theory if not a pattern that provides a simple way out for complex situations which are beyond the ability of simple comprehension?

So what does this have to do with management, transparency and anarchy? Well transparency is seen as a key ingredient of enlightened modern leadership. But consider this; the leader has an additional ability for perspective, which is why he or she is the leader in the first place. Call it a more powerful pattern fitting ability. And so, if the leader shared all the information he is exposed to with his subordinates in an effort to build consensus and rally the team around a purpose, the opposite may happen. That is because, given access to the same information the team is likely to fit simpler patterns to a given situation. And regarded from a simpler perspective, the leader’s actions won’t make sense. Questioning the leader is only a step away, and anarchy is always close by. Consensus may indeed be reached, against the leader’s authority.

And so, the solution? Give people an inspiring vision and share with them enough so they can do their jobs effectively in support of the vision.

The insights presented have to be of course tailored to the situation at hand. Office situations are seldom heated enough to qualify for the “anarchy” appellation. Also, in organizations where politics trumps competence, leaders are often less competent in perspective than their subordinates. In other words an incompetent leader may give the team good reason to question his or her decisions.